How my daughter got the edge to get a college volleyball scholarship.

How inventing The Edge helped my daughter get an athletic scholarship to play volleyball.

They say parents will do anything for their kids. For my daughter, Alyssa, I think I took that a bit farther than most in regards to helping her be a better volleyball player. Years ago, after yet another long ride home (with the distinct pungent smell of knee pads) from a volleyball tournament, I felt the need to dig a little deeper into what exactly the tears were for.

I tried to cut the silence by prodding to get her to open up. I started by asking how she felt going the whole tournament not winning a set. With a sniffle she answered, “I don’t know. It stinks!” To which I “enlightened” with my patriarchal wisdom of, “well, it’s going to be a character building year then”.  Deep down I’m thinking, this is true. Let’s see what’s she’s made of.

Club Volleyball was new to our family. Alyssa had been invited to play on the church school team. The coaches knew her from softball and thought she would be a good fit. This was her second year playing and they had gone undefeated in their conference. Alyssa was used to playing with advanced athletic players and she had a lot of fun winning.

Here another parent taught us about the wonderful world of club. We learned about and were surprised of it’s enormity. Based on Alyssa’s passion for the sport and the fun we had watching her play, we would give it a go and have her try out for one of these club teams.

Things didn’t go so well. It seems Alyssa wasn’t exactly an athlete, but we didn’t know that yet. After all, she was 11 years old, short, slow and a little awkward. All symptoms of a regular preteen girl. After several tryouts she made her first club team, but not without drama. 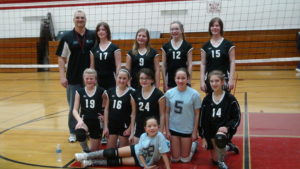 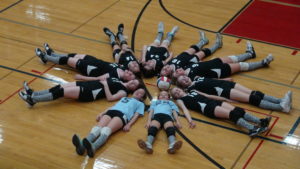 She was beat out for a spot on the 1’s team by a teammate from the church team. There were a lot of tears at dinner that night and not just from Alyssa. (My wife found out what it cost to play club.) This was tough to swallow as we didn’t understand what the future held for us.

After two seasons Alyssa did not get on the teams she hoped for. The offers weren’t pouring in. She played on one average team and one terrible team. We met a lot of great parents and good kids, but what she really needed was options–more offers. 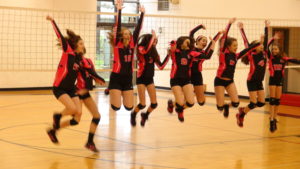 She needed a better way to train.

Dad to the rescue. I told her I would make something so she could practice at home. More touches, work harder, get better. That was my formula to get more offers.

She pursued setter. She had the build for it and loved the quarterback component to this position. So, I started by looking on the internet for setter stands.

But, before I put any more of my time into this, we made a deal. If she just wanted to hang out, make some new friends and play volleyball I would not pursue extra help. If she wanted to get better,  I would help her train. She didn’t hesitate. My research continued.

Online setter stands were too expensive, too cumbersome and difficult to store. We needed to find a way she could practice hitting at home. So I thought I would combine the two. I spent the summer of her 13’s club year working in the garage and visiting the hardware store.

I purposely stayed off the internet after the setter stand search in order to make sure what I invented was my own. I wanted it to be mine, not a copy. I was focused. She’s my only child and I wanted her to be able to achieve her dream. After months, it happened. It was the first version of The Edge Pro Volleyball Trainer.

It’s around this time Alyssa expressed her lofty goals for her future in volleyball. She talked about making the JV team when she got to high school, even how cool it would be to play in college. This continued to fuel my quest to build the best training tool ever. 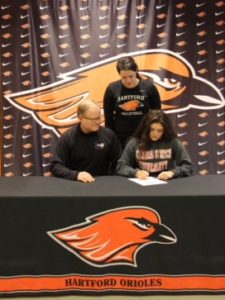 She practiced right in our driveway. We put together a routine that incorporated footwork, speed and accuracy. We set goals like making  25 sets into The Edge Target Stand and 10 backsets. Some days were longer than others… 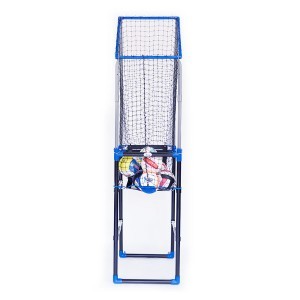 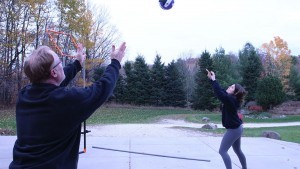 The proof was in the fall Club tryouts. She had adapted soft, strong hands and quick feet. She was ready. And the clubs thought so too. She got 4 offers that season! This was a big deal and I knew I was on to something.

In the coming months, I would show The Edge to several coaches. Parents, friends and her club coach encouraged me toward developing the machine and selling it to the public. I sold three machines to her teammates that week. I knew this was something special. 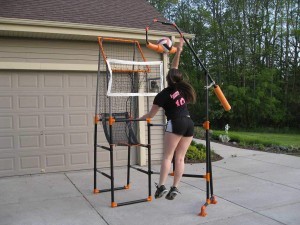 And special it was!

Alyssa continued to work hard at home using The Edge Pro Volleyball Trainer and went on to achieve all her volleyball goals. She made the JV team as a freshman and Varsity the next 3 years. As a junior in high school she attended a college volleyball recruiting showcase offered by UW Green Bay and had serious interest from several coaches wanting her to come and play for their school.

In all, she had 2 NAIA division schools and 3 NCAA schools recruiting her. My 5’2” Alyssa achieved the last of her volleyball dreams when she signed with the Cardinal Stritch Wolves and received an athletic scholarship to play volleyball.  You could say her hard work, along with having the Edge at home, paid off.

In April, Alyssa played her last club tournament as an 18’s player.

It was a sad moment for us. This chapter is over. The tournaments, the families, the memories…no more back seat tears. But, I’m thrilled to report, we have a new chapter. One that involves watching her play college and knowing that I had a part in giving her the edge to be a great athlete.

Thank you for reading our Blog. Please sign up for our newsletter and comment below. Also, let us know what topics you would like us to write about.